As a Lover of Poetry and at least an Attempt-er (a wannabe— “circa about 1980 from, “want to be”), at Writing Poems, This is My Love Story, About a Poem by a Poet, I Recently Read

(A Love Story or Love Poem for short)

Recently, I watched the movie, ‘The Shape of Water’. It was well acted, well scripted, had that whole intrigue, protagonist/antagonist thing going for it, the elements that make great films. Costume design was excellent. This was well thought out as I could see it’s appeal for men, I being one. And surely it appealed to women too? Yes, for the ladies or romantics, it had a love angle. Thankfully, the relationship started as human compassion and empathy. By near the end, it became a full-blown love story. Now that is where anything good I have to say about this movie ends. But in my opinion, it became not just a creature feature, but evolved into a bizarre rick flick! Rick: a painful muscle spasm especially in the neck or back. Yeh, I got a Rick watching this flick., there was in my opinion, a bizarre, love story. I watched most of it and through to the very end.

The Bible speaks to me as thus:

“Better is the end of a thing than the beginning thereof: and the patient in spirit is better than the proud in spirit.”

“Behold, this have I found, saith the preacher, counting one by one, to find out the account:

Which yet my soul seeketh, but I find not: one man among a thousand…”

Mine came at the very end of the movie. The story had ended and the screen faded to an empty background. The narrator spoke and said something to the sum and substance of, “Hundreds of years ago a poet wrote…” Then the line from the poem was placed on the screen and the same unseen narrator, read it aloud_

“Unable to perceive the shape of You, I find You all around me. Your presence fills my eyes with Your love, It humbles my heart, For You are everywhere.”

Being a lover of poetry myself, I was captured by those words. As a man that knows love, it’s sting at it’s ending, it’s pain unrequited and it’s wholeness in being found by love, I was more than moved.

As a former trained investigative reporter and one keen on giving credit where credit is due, I researched this mystery, in hope to find the poet author and perhaps who they were writing about.

Supposedly, the poet’s name was listed in the credits as they rolled past the screen. I never saw them.

Interviews with the person responsible, for this appearing in the movie and its placement at the end, said that it came from a book he had picked up, near where the movie was being filmed. He gave the name of the poet from which it came. Others concurred and that they had seen the film’s credits showing this, at its ending.

Still others disputed that the actual poet attributed, was not the one that had written those words.

I have read much work written by “unknown” and they are among my favorite poets. Most often it is only who said it, may give it credibility and lend to their acceptance by another or by others? But it is the words themselves, that have the potential to transform or destroy, the hearer; the reader.

Poets, whenever there first became poetry and a poet that wrote it, have always tried to express love. It may actually be, inexpressible? But if there are poets still today, they are no doubt, still trying to capture love in a net like an elusive butterfly, for themselves and maybe to share it with others.

If there are others like myself, that attempt to write poetry, we all still try to define love.

And if there are those that still read poetry, the poets of past, present and future, and us wannabes, we all still try to understand mostly, not which anyone could ever find, but may be found of love.

The first seven words from the poem hit me like water in my face, sudden and shocking, like having fallen overboard, into it. Who can say, but the whole idea of falling in love, may have become associated with love, and by this very analogy? But read the first seven words again.

“Unable to perceive the shape of You…”.

If the poet were female, speaking of, to or about her male love, how odd that she could not perceive the shape of him. If the poet were male, speaking of, to or about his female love, how odd that he could not perceive the shape of her. This poem cannot be about anything or anyone, any have ever known or will ever know in this life by their mere five senses. Surely, if this were not true, the shape could be perceived?

I suppose it could also be words about a love that is no more, an unrequited love or a love that has passed away?

It could be about an adult, a child, a pet and perhaps even an inanimate thing, as a stuffed toy from childhood, connective, roots, bonds and family.

But the words still, are peculiar to me. I am stuck with the inability “to perceive the shape…” At the end of those seven words is, a personal pronoun. Indeed the poem is personal. But the word “You…” is capitalized and for purposeful emphasis.

Poetry has always and is still, argued over as to ‘what IT is’. And if there is no clear definition of what “it” is, what “is” a poem and who is a poet, would also remain forever unclear and left to the whims of personal opinion. That to me would make language useless, as a tool of communication.

For myself, I have long accepted and have been totally satisfied with the origin from which words as poetry, poem and poet have come to us. An ancient mathematical, logical, and based on reason culture was ancient Greece and their ancient Greek language. The word they used was poema (ποίημα), and it was simply defined as, “to do or to make”. I am satisfied that both this poem and even my attempts at writing poetry, satisfies the definition of, “to do or to make”. It is a broad field and an all-inclusive definition. Everyone does or makes something and therefore, everyone is a poet.

I used the word “peculiar” above when I wrote about the first seven words in this poem. They are unusual in the sense that they do not follow a usual manner of writing and even the capitalized word “You” at the end of the line, sticks out like a sore thumb. I just gave a clue in my last sentence, comparing something you may have actually experienced, with something else that just might “stick out”, as well.

Even if I am just a wannabe poet (a doer and a maker), like me using words out of the ordinary sense, would be extraordinary in their usage, even if not in their mastery. Even this is simply defined as, a figure of speech or figures of speech. And those words use a figure of speech, to define themselves.

The ancient Greeks may have catalogued as many as 220-225 different figures of speech. The Bible uses 212 of those and sometimes, as many as 20-40 varieties under one figure. There is a lifelong research project for someone! But figures of speech have rules and order. There is no guesswork about them. They are a legitimate grammatical usage of words that are defined with a figure, ‘they are truer to truth, than a literal statement of fact.’ The ground is dry may be a literal statement of fact. But if the words used to describe the fact were that the ground is thirsty, it magnifies and emphasizes, the literal fact and gives to the reader; hearer, a mental image, not likely to be forgotten.

So, besides poetry simply being something one does or makes, in language, it carries a simple definition and with a figure of speech to do it. Poetry is, “beauty of speech”.

Literally, there is nothing beautiful about words unless perhaps, some artist uses decorative flourishes to write them. Sanskrit and Arabic are each a beautiful script.

Not all poetry is light, some is dark. Not all is about love, some is hate. Poetry can span and does enclose every human emotion. But the way in which the words may be constructed, it adds extra to the ordinary and transform it into something extraordinary! That “extra” would constitute, “beauty of speech”.

Even the title of this movie, ‘The Shape of Water’ is, “beauty of speech” and it is, a figure of speech.

What is the shape of water? By nature it exists in three states— solid, liquid or gas.

In liquid state, water is fluid and flowing, movable and can also be, glass-like still. It is life-giving. It can drown the life it nourishes.

In solid state, water is more like rock and its movement may not be seen, only its mass. It can be a thing of beauty and exquisite artistry, awe and inspiration. As liquid it gives life, in solid state, water can be used to take life as a dagger, undetectable, when it evaporates after, it has returned to its liquid state.

As a gas, it is vaporous, vapid and then vapor and disappears from the naked eye, without detection or perception. Its absence can take life.

The Shape of Water

My interpretation if you like the word or the way I take this poem, you may disagree with and that is your right to do. But the subject of the poem is the poet. They are unable to perceive the shape of (the object). The poet uses several capitalized pronouns for emphasis (reverence, acknowledgement). The poet perceives the presence of the object. The poet perceives the presence of his or her love to be all around. This perception fills the poet’s eyes with the object’s love. The poet acknowledges his or her humility, for they perceive the object of their love to be, “everywhere”!

The poet is speaking to his or her love and it is to God! And we only know of this personal love story because, the poet shared it (wrote it down).

My humility is that in all my searching, I never found Him, He found me. And He alone can and does, allow me to perceive His presence everywhere and He fills me with, His Love for me.

The shape of water is, that He is everywhere and He is Spirit, and I and all His angelic messengers, are made in His image!

“Unable to perceive the shape of You, I find You all around me. Your presence fills my eyes with Your love, It humbles my heart, For You are everywhere.” 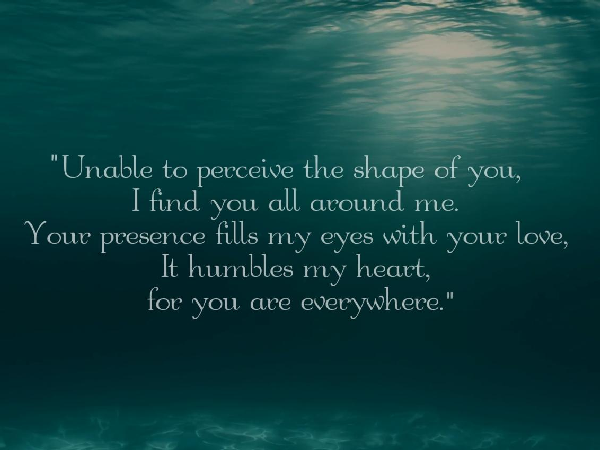 The Love of God revealed and perceived!

Now if you want to dispute any of this. Go for it, but I did not write the Bible or perceive God. He allowed me to perceive Him and I am just…

This site uses Akismet to reduce spam. Learn how your comment data is processed.